In the wake of the coronavirus and the national lockdown many businesses are experiencing or may in the near future experience financial difficulties. Failing a timeous upturn in economic circumstances, such financial difficulties may be overcome by making payment arrangements with creditors. However, if this is not possible or does not have the desired results, a business should consider business rescue or liquidation.

Business rescue is only a viable option if the economic climate is such that it is possible for a company to generate sufficient income to survive, following restructuring of the business and formal arrangements with creditors.

Once the provisional liquidation order is granted, employment contracts and obligations towards SARS and other creditors are suspended. No further legal action in respect of debts can be instituted against the company, and actions already instituted are suspended.

The court date for the granting of the final liquidation order generally will be set down for about 5 weeks after the date of granting the provisional order.

When you make the decision to liquidate, you should no longer make any payments to creditors. It can in fact be a contravention of the Companies Act or the Insolvency Act to make payments when the company is commercially insolvent.

An insolvent company may also be liquidated by a court on the alternative ground for liquidation, that it is just and equitable to do so. If it can be shown that the liquidation would be to the advantage of all creditors, for example, that all the unsecured creditors will probably be paid some dividend, which is not negligible, this would be an important factor in the decision as to whether it would be just and equitable to liquidate – as opposed to some creditors being preferred. A company can however be liquidated even if it has no assets, but if a decision to liquidate is left too long, it may result in the applicant, such as a shareholder, and unsecured creditors having to pay a contribution to the liquidator when the costs of the liquidation cannot be recouped from the liquidated company.

If your company is struggling financially in the current economic climate, you should seek legal advice sooner rather than later. 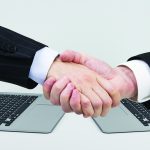 Understanding the Validity of Electronic Contracts